Smaller Group Size
What to expect

Meet your friendly guide and listen to the day's itinerary, then jump into an electric vehicle and head out on your audio-guided tour of Kazimierz. Pass various landmarks such as the famous factory of Oskar Schindler. For many centuries, Kazimierz was a place of coexistence for ethnic Polish and Jewish cultures until the Jewish inhabitants were forcibly relocated in 1941 by the German occupying forces. Discover what life was like for Krakow's Jewish residents during the war, and see the former Ghetto across the river where they were forced to live.Some of the landmarks visited on the tour include Plac Bohaterów Getta (Heroes of the Ghetto Square), and Apteka Pod Orlem (Pharmacy Under the Eagle). Finally, the highlight of the tour is a stop at the iconic factory of Oskar Schindler, who is credited with saving the lives of 1,200 Jews during the Holocaust. 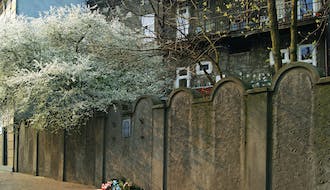