Are you curious about the area where Vincent van Gogh made a quarter of his works? Do you want to see and experience the places he painted or sketched in real life? Then quickly book this individual bike tour that we have developed for you in collaboration with the Vincentre museum in Nuenen. You really follow his footsteps from Eindhoven to the Vincentre in Van Gogh Village Nuenen, opposite his parents' house.

You start this tour in the center of Eindhoven at the historic NRE site where you can also pick up your rental bike if you book it through us. By bike you follow the route that Vincent walked from the station in Eindhoven to his parents in Nuenen. The route is available in our own web app (Dutch and automatically translated into 8 languages including English, German and French) and you can follow it conveniently on your own smartphone. In the Netherlands it is forbidden to cycle with your phone in your hand, so make sure you have a phone holder for your handlebars. If you rent a bicycle through City Tours Eindhoven, you can borrow a phone holder for a deposit of € 5.

You experience the places (visible and now invisible) where his painter friends Antoon Hermans, Anton Kerssemakers, Willem van de Wakker and Dimmen Gestel lived and where he got his painting supplies. You can see the house of his friend Anton Hermans and the Catharina church that Van Gogh sketched from Hermans' backyard, but also the Tongelre district with the watermill of Coll and the Van Gogh-Roosegaarde cycle path.

Then you cycle into Nuenen and drink coffee/tea with cake at the Opwetten watermill, which was painted by van Gogh. Via the Clemenskerk, windmill de Roosdonck, the place where the potato eaters house stood and the Van Gogh church you go to the Vincentre museum. Many of these locations in Nuenen have been captured by Vincent van Gogh in a sketch or painting or are reminders of him.

Part of this tour is the Vincentre museum, where you can catch your breath in the coffee corner after cycling.

After the rest you have the opportunity to visit the museum including audio system. The languages Dutch, English, German, French, Spanish, Italian, Chinese and Japanese are included in the audio tour in the museum.

There is no other place in the Netherlands where you can get so close to the painter. Nuenen alone has 14 locations painted or sketched by Vincent van Gogh. He made no less than a quarter of all his works here. Here you can admire a number of works by his Eindhoven painter friends in real life. The museum is open until 5pm (closed Mondays).

After the visit to the museum, you will cycle past a number of important points such as the vicar's house, Nune ville, the Begemann factory, the Broek nature reserve and some monuments. You cycle back to Eindhoven via a beautiful rural route and look back on a beautiful tour where you really came closer to Van Gogh.

The Vincentre in Nuenen (included)

Experience how Van Gogh lived in Nuenen thanks to the wonders of audiovisual technology. Watch the potato eaters come to life during a multimedia presentation and read the stories of and about Van Gogh. Get to know him as a person and see his development into a world famous painter.

We book an entrance time slot for the museum at approximately 1.30 pm. This is handled flexibly in the museum and can be changed. 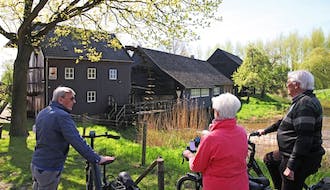