Skip the line
What to expect

Described by Balzac over lunch one day as "a facetted diamond set in the Indre", Azay-le-Rideau is one of the most famous châteaux of the Loire. Built in the early part of the 11th century, the Château of Azay-le-Rideau was burned during the Hundred Years’ War and later rebuilt during the reign of François I, by a wealthy financier. A true synthesis between the French art of construction and the innovations in Italian architecture, the Château of Azay-le-Rideau is an authentic masterpiece of the Renaissance. Set on an island in the middle of the Indre river, this picturesque château has become an absolute jewel of the Loire Valley, incredibly pretty inside and out. 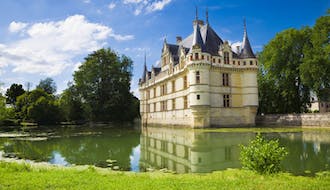 Open tickets can be used anytime before January 1, 1970

Total: USD
0
×
Priority entrance tickets for the Château Azay le Rideau
from:
$ 12
Sorry, it\'s sold out
Unfortunately all tickets have been sold out for this event