Although its landlocked, Hungary has plenty of water boasting over 100 thermal springs in Budapest alone! Experience the ancient healing properties of Budapest's waters, that have been used since the Roman times, with your entrance ticket to the Palatinus Baths. Opened in 1921 on Margaret Island, the Palatinus was the first modern open-air bath of Budapest and the largest in Europe until World War II. Due to the sudden increase in popularity, the baths were extended in 1936, to include a Bauhaus style main entrance and wave pool. Expansion projects continued in the 1960's and 80's with larger sun lounge areas, enclosed showers, an additional 18,000 square meters of playareas and even a five-lane slide.Today, Palatinus Thermal Baths are open year-round and hold a spa, open air-bath, wave pool and 15 other pools! Let the little ones splash in the kids pool, boost your circulation in the ice cold immersion pool and take a dip in the outdoor thermal pools. 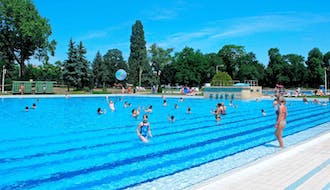 Total: USD
0
×
Palatinus Thermal Bath entrance ticket
from:
$ 16
Sorry, it\'s sold out
Unfortunately all tickets have been sold out for this event