Half-day Trip from Prague to Terezín Memorial with Admissions

Guided Tour
What to expect

The city of Terezín served as a Jewish concentration camp during World War II. It was founded in the late 18th century by Emperor Joseph II as a fortress to protect The Kingdom of Bohemia. The history of Terezín is important and interesting. Hear how in 1940, the German Gestapo took control of the city, and Terezín was turned into a Jewish ghetto.During your visit, you’ll come to understand more about World War II and its impact on Europe. You will visit the Small Fortress of Terezín and museums in the Big Fortress. At the end of the tour, there will be transport to Prague city center. 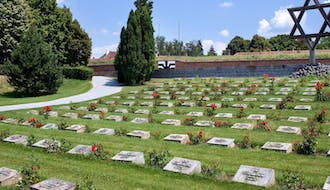 Total: USD
0
×
Half-day Trip from Prague to Terezín Memorial with Admissions
from:
$ 54