Free cancellation
What to expect

Discover Rome at your own pace with a combined 24/48-hour ticket for a hop-on hop-off sightseeing bus, and a guided tour of the Colosseum, Roman Forum, and Palatine Hill. Walk in the footsteps of Roman emperors and citizens on a tour of Ancient Rome, with skip-the line entrance to the Roman Forum. Walk along the Via Sacra and immerse yourself in Roman history. The main path through the Roman Forum, the Via Sacra once sparkled with festivals and triumphal processions. End at the Temple, which houses the altar where Julius Caesar was cremated.Before reaching the Colosseum, get a general overview of Palatine Hill, where legend has it that Romulus founded the city of Rome. The hill looks down over the Roman Forum and the Circus Maximus chariot-racing circuit. Once inside the Colosseum, your expert guide will teach you about the amphitheater's bloody past, with tales of gladiators, mock sea battles, and executions.After discovering the highlights of Imperial Rome, you can use your 24 or 48-hour ticket for the open-top hop-on-hop-off sightseeing bus to discover more of the city. 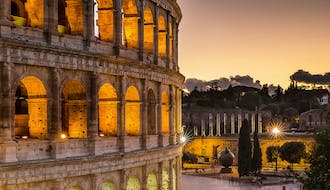 Total: USD
0
×
Guided tour of Colosseum, Palatine Hill and hop-on hop- off Rome bus tour
from:
$ 86
Sorry, it\'s sold out
Unfortunately all tickets have been sold out for this event