A cruise with a difference this – it's not just what you see that's the attraction, it's where you see it from. The Gageiro is a sailboat infused with the sophistication and glamour or the Roaring Twenties, and it's the vantage point from where you'll cast your eyes on cliffs, staggering rock formations and secret coves of the Algarve coastline.Whether you sail west to Lagos or east to Armação de Pêra, you're in for a treat. The captain and his friendly crew will look after you from the moment you board the Gageiro at Portimão. Sail down past the villas and castle on the banks of the River Arade and into the Atlantic, where the fun begins in earnest.If you head in the direction of Armação de Pêra, you'll see Carvoeiro and the fascinating twisting rock formations of Algar Seco. And the route towards Lagos takes you past Vau Beach, where golden sands are protected by towering cliffs. It promises the Algarve from all the best angles. 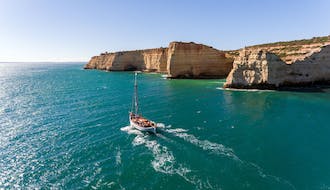 Total: USD
0
×
Gageiro Cruise Ticket
from:
$ 40
Sorry, it\'s sold out
Unfortunately all tickets have been sold out for this event