See the highlights of ancient and modern Amman on a private 6-hour city tour. Travel in a private, air-conditioned vehicle with an informative driver guide to the top attractions in Jordan's capital city - also known as Philadelphia.Begin your tour with pick up from your accommodation in Dead Sea hotel. As you travel, hear about the history of this fascinating city, whose past stretches back to 3500 B.C. or before. Hear about the city’s days under the Roman Empire, and view the King Abdullah Mosque, famous for its blue mosaic dome, and the nearby Coptic Church.Next, make your way to Amman Citadel and explore the timeworn Roman, Byzantine and early Islamic relics. Then pay a visit to the Citadel’s Archaeological Museum to inspect its collections of ancient artifacts discovered at sites from across Jordan.Head to the Roman Amphitheater to admire the symmetry and scale of the theater as your guide explains how it was built as part of the Roman city of Philadelphia, and could accommodate up to 6,000 spectators. Continue to the Museum of Popular Traditions, with an exhibition of traditional dress and jewelry. Pass the 'Raghadan Palace', and ride around the downtown area for free time at its vibrant markets. Stroll along Rainbow Street, Amman's colorful arts and shopping hot spot, passing the Jordan River Foundation and residence of King Talal. Delve into the upscale neighborhoods of 'Abdoun' and 'Swefieh', where luxury shopping malls and swanky private villas line the streets.After your classic city tour, you'll proceed to the Jordan Museum and the vintage, Hashemite Royalty private collection cars at the Royal Automobile Museum showcasing a rare collection of Jordan's vehicles ranging from King Hussein bin Ali's cars that came to the city in 1916 A.D. to modern sports cars.Choose to upgrade your experience to include a luxurious Turkish bath or savor a mouth-watering lunch of 'Arabic Mezze'. 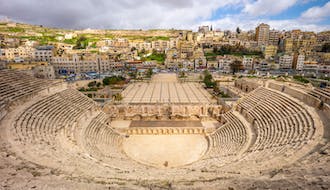 Total: USD
0
×
Full-day ancient and modern private tour of Amman with transport from Dead Sea
from:
$ 154
Sorry, it\'s sold out
Unfortunately all tickets have been sold out for this event