Guided Tour
What to expect

Explore nature in Atlanta, Georgia, the most forested major city in the US, where even the main street is named after a tree! This guided tour will take you to all the major green zones of the city. Discover why Atlanta is known as a city in a forest!Stops on your tour will include:- Piedmont Park and Atlanta Botanical Gardens – Atlanta’s Central Park, this 189-acre urban green-space is home to the Atlanta Botanical Gardens which offer more than 30 acres of botany including a 40-foot-tall canopy walk through the forest- Ansley Park - this neighborhood was the birthplace of Margaret Mitchell and features winding roads, beautiful landscaping, and a variety of architecture predominantly from the early 20th century- Olmsted Linear Park – developed by Frederick Law Olmsted, landscape architect of NYC’s Central Park, it's the 'front yard' to stately homes in the Druid Hills neighborhood- Grant Park – the oldest park in the city and home to Zoo Atlanta, the 131-acre park is surrounded by the largest collection of Victorian cottages and Craftsman bungalows in the city 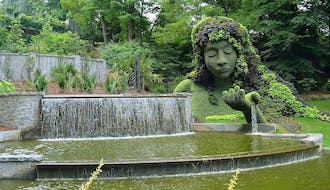 Total: USD
0
×
‘City in a Forest’ Atlanta nature tour
from:
$ 125
Sorry, it\'s sold out
Unfortunately all tickets have been sold out for this event