London has millions of tales to tell, but non more thrilling than those written by Agatha Christie. This British Dame is the best-selling novelist of all time and this tour allows you step into her shoes and follow the tracks she left around the city, from places she loved to places her characters visited to places she was inspired by. You will work your way across London from Euston Square to Green Park and everywhere in between, taking in The Garrick Club, The British Museum and the University of London en route, to name but a few. Not only will you discover the city in a new light, you'll also get under the skin of Christie's personal life, from authors whom she admired like Sir Arthur Conan Doyle, her marriage to Max Mallowen, her work in a hospital dispensary and her connections within the infmaous Detection Club, which all have their part to play in the works she created. You'll discover the home of "The Mousetrap" Agatha Christie's famous play which is the longest-running in the World, St Martin's Theatre and discover the royal inspiration behind the play and the stories of the the acting greats who have taken to the stage to perform this brilliant piece of drama. Coming in third place behind only the Bible and the works fo Shakespeare, Agatha Christie is a clear front-runner for most-published author, and this tour shows you the scale and depth of her writing which has captured hearts, enthralled the masses and which changed the literary landscape forever. 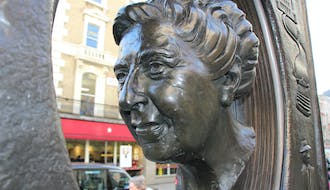 Total: USD
0
×
Agatha Christie London tour
from:
$ 19
Sorry, it\'s sold out
Unfortunately all tickets have been sold out for this event