Kefalonia was just one of seven beautiful Ionian islands until Captain Corelli came along with his mandolin and sprinkled some Hollywood glamour on its shores. But there's more than silver screen glitz for you to uncover on this adults-only tour. Jane, one of our expert local guides, says, ‘You'll hear all about the fascinating history, Greek mythology and love stories of Kefalonia.'

Your adventure kicks off underground at the romantic Lake Melissani. The ancient Greeks called it the Cave of the Nymphs. It's quite the experience to glide over its glistening waters, piloted by a friendly local gondolier. We'll then head to Sami, the fishing village in which Nicolas Cage's Italian soldier fell in love with local doctor's daughter Penelope Cruz. Next up is a pit stop at Agia Efimia, where you'll have some time to poke around the shops before boarding a boat for a cruise.

We'll sail along the northeastern coast of Kefalonia – all pine-clad hills punctured by hidden coves of pebbly beaches. The boat will dock in Fiskardo, where you'll drop into a family-run taverna for a lunch made from locally sourced organic ingredients. This tiny port of pastel-coloured houses and flower-filled stone streets is ‘proud of its Venetian architecture and Roman heritage', says Jane. In the afternoon, you'll visit the untouched perfection of the village of Assos and see Myrtos beach – one of the stars of Captain Corelli. Many rate it as one of the world's most beautiful beaches, adds Jane. 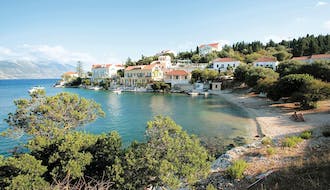