Discover the best Zurich has to offer on a self-guided audio tour of the city's must-see attractions.

Start your tour from the monument of Pestalozzi, one of the greatest pedagogues who made a massive contribution to the theory and practice of pedagogy. Then, admire the magnificent view of Zurich from Lindenhof Hill and learn how it used to be a Roman fortress. Later, a Carolingian royal palace was built in its place, and the wonderful garden with linden trees appeared.

Marvel at the fascinating facades of Saint Peter's Church with the four key notes of the bell. Did you know it also has the largest clock face in Europe - nearly 9 meters in diameter! Continue to the Grossmunster Church built in a mixture of different styles and the Wasserkirche, where the first public library in Zurich was opened.

Wander around the Weinplatz with the beautiful fountain depicting a Swiss winemaker, pass the oldest building in the city, the Hotel zum Storchen and listen to the legend about it. Finally, have a look at the Town Hall, the magnificent facade of which is decorated with a beautiful arcade. 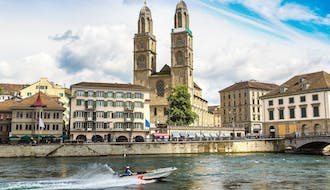