The time has come to tell your friends and family a beautiful Roman story. Begin to become familiar with your e-Bike as you pedal safely along the Tiber cycle path, and admire the beauties of Rome from a different perspective before reaching the ancient Appian Way.

This tour aims to combine architectural treasures with a long walk surrounded by greenery. Being one of the most important access routes of the city and of the Roman Empire, the Appian Way will be your itinerary. Your expert tour guide will guide you through landmarks such as the Basilica of San Sebastiano Fuori le Mura, the mausoleum of Cecilia Metella, and the Quo Vadis.

Not many places in Rome are off the beaten track, continue this exciting itinerary by visiting an ancient Roman quarry on your bike. This site is something you would never have seen before: Silent but fascinating galleries that once housed ancient Roman catacombs, later transformed into air raid shelters during World War II.

Combine the architectural beauties of Rome with the sweet air of nature. An expert guide will assist you on this journey by sharing fascinating stories and anecdotes about the setting that will surround you. Don’t miss the chance to explore Rome in a non-traditional way! 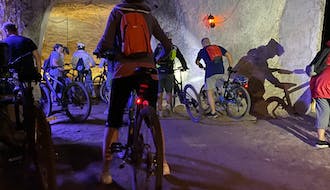