Enjoy your Millennium Park tour and learn all about its history.

Start from the park’s north end, by the Harris Theatre for Music and Dance. From there, head south toward the Pritzker Pavilion while hearing some background on how the park came into existence. Once at the impressive pavilion, learn about the vast array of performances held here and the high-tech design which makes it all possible, as well as the man behind it: Jay Pritzker. Get the full story on this precocious kid who went from building model cities out of his grandfather’s scrap wood to designing some of the most famous structures in the country.

Continue to the park’s so-called “Secret Garden.” Take a stroll along a peaceful boardwalk surrounded by plant life and listen to a little-known symbolism behind the garden’s design. Then pause for a fantastic look at Chicago’s skyline. Next, head past the Art Institute of Chicago and end up at the astonishing Crown Fountain. Get familiar with the intricately detailed “face towers” of the fountain, then head north toward Chicago’s most famous sculpture.

At last, you’ll arrive at Cloud Gate, known by the locals as “The Bean” (although the artist positively hates this name). Learn about the wacky artist behind it, as well as the technique he used to create such a huge, smooth surface. And don’t forget to snap some surreal pictures of your reflection. The tour concludes here. 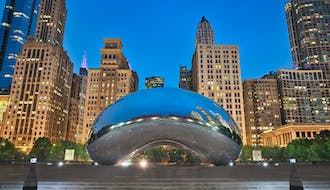