Go behind the scenes on the world-famous Studio Tour to explore real film sets where Hollywood movies are made.

Then, face action head-on in heart-pounding rides, shows and attractions including Illumination’s Despicable Me Minion Mayhem, Fast and Furious- Supercharged and TRANSFORMERS: The Ride-3D – that put you inside some of the world’s most popular movies and TV shows.

Explore the mysteries of Hogwarts™ castle, visit the shops of Hogsmeade™, and experience Harry Potter and the Forbidden Journey™ in The Wizarding World of Harry Potter™.

And brace yourself for an epic adventure: Jurassic World – The Ride, based on the popular film franchise. Enter an immersive land and come face-to-face with the new Indominus rex as she stalks you through the jungle. Get caught in the fray as she’s confronted by her archrival, the Tyrannosaurus rex, in an epic battle for the ages! 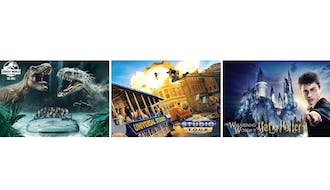