Discover the dark side of Gropparello Castle on a guided night tour. Visit the castle with a professional guide and hear the fascinating mysteries and legends of this haunted place.

Rosania dies in this horrible way and her spirit remains attached to the place of her unhappy existence, manifesting itself on certain nights with moans and groans that would be heard often since then by those who inhabited the castle. The diaphanous figure of a young woman dressed in white would also sometimes be seen wandering in the park or in the rooms of the castle. 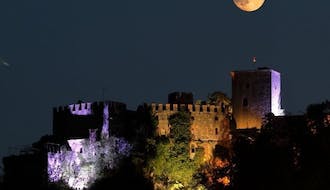