Join Sophia and Colm on this audio-guided tour as they lead you around Downtown Singapore!Starting from the Elgin Bridge, stroll along the Singapore River and listen as the audio guide tells the island nation's fascinating history, from its origin over a thousand years ago to its transformation in the 20th century and its current role in 21st century Asia. You’ll discover hotspots including St Andrew's Cathedral, Singapore’s Padang playing field, the National Gallery - the Former Supreme Court Building, and The Arts House, probably the oldest surviving building in Singapore!Your audio guide will also lead you to Singapore’s Town Hall, and next to it you’ll find the Victoria Concert Hall, constructed in 1902 to honor Queen Victoria.After exploring the city, the tour will come to an end at the stunning Marina Bay. Admire Singapore’s beauty with the Art Science Museum in the form of a lotus flower, and don’t miss Marina Bay Sands, a bizarre building that looks like a floating ship dominating Singapore’s skyline. This is a truly iconic hotel 55 stories high with some of the best views of the city you can imagine. You’ve also got the Ferris wheel Singapore Flyer, the Red Dot Design Museum, and of course, all of Singapore’s skyscrapers that create quite the impressive light show if you come and visit at night! 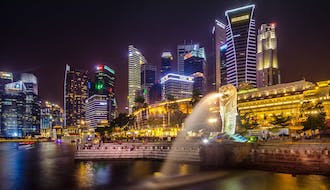