Experience a private guided tour through London's role in the Cold War, the origins of MI5, MI6 and Churchill's role in bringing down the Nazi regime.Follow your guide, who is an expert in spy history, past the buildings and sites where these world-changing events have taken place. Along the way, you'll hear stories that seem more like a novel than real life from the Second World War, Cold War History and continuing foreign operatives that are carried out from London. Venture out into the streets of Westminster and discover the area's colorful history of espionage, dirty politics and death. This is where the toppling of regimes, battles against ideology and revolution have all been orchestrated. Visit the locations of infamous covert operations and traitorous meetings involving double agents. After your walking tour, you will receive reserved entrance tickets to the Churchill War Rooms, located below the streets of Westminster. See the underground network of bunkers that functioned as British wartime offices, planning and map rooms. Learn about the Allied intelligence and strategy that was discussed and planned in WWII, as well as serving as a place of refuge and shelter for government during the blitz. Attractions along this route: - Downing Street - St James' Park - Horse Guards Parade - St Ermin's Hotel - Whitehall Place - MI5 Security Service Headquarters - Old War Office Building 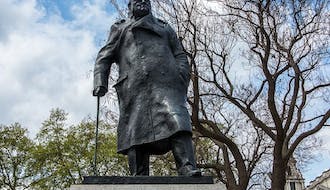