St. Stephen's Basilica is one of the most beautiful neo-classical buildings of Budapest. Experience an unforgettable organ concert in this magnificent building and see some of the country’s best artists perform.The arias of the program are performed by Kolos Kováts, one of the most famous and talented concert and oratorio singer in Hungary. He received the Liszt Ferenc prize, Merit of Art and the Kossuth Prize.Flute performance is added to the concert as well, it is played by Eleonóra Krusic who had been playing many times and in many orchestras in Hungary and abroad during the last years. Program:- Wolfgang Amadeus Mozart (1756-1791): Fantasie in F minor K 506- Alessandro Stradella (1639-1682): Pietà Signore- Tomaso Albinoni (1671-1751): Adagio- Liszt Ferenc (1811-1886) - Camille Saint-Saёns (1835-1921): Legend in A major (St. Francis of Assisi's Sermon to the Birds)- Giuseppe Verdi (1813-1901): Prayer of Fiesco from opera Simone Boccanegra- Johann Sebastian Bach (1685-1750): Polonaise, Minuet and Badinerie from Suite in B minor BWV 1067- Johann Sebastian Bach: Toccata and Fugue in D minor BWV 565 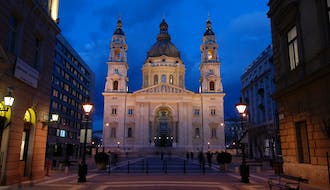 Total: USD
0
×
Organ concert in the St Stephen’s Basilica
from:
$ 21
Sorry, it\'s sold out
Unfortunately all tickets have been sold out for this event