New York proudly holds the title as the most filmed city in the world! On this super fun TV and movie bus tour, explore the city’s most recognizable locations while learning some of the TV and film industry's best-kept secrets. See the locations where Billions, Veep, The Marvelous Mrs. Maisel, Will & Grace, Younger, Mr. Robot, The Unbreakable Kimmy Schmidt, Homeland, Divorce and more were filmed.Other highlights include:- Oscorp and Daily Bugle office buildings from Spider-Man and The Amazing Spider-Man- Park featured in Girls, Glee, The Mindy Project, When Harry Met Sally, etc.- Hotels featured in Ocean’s 8, Modern Family, American Hustle and The Sopranos- The Original Soup Man, along with other Seinfeld locations- Popular spots from Friends including the gang’s apartment building- McGee's Pub, the bar used as the inspiration for the one used on How I Met Your Mother 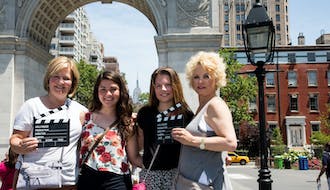 Total: USD
0
×
New York City TV and movie bus tour
from:
$ 61
Sorry, it\'s sold out
Unfortunately all tickets have been sold out for this event