Book this full day guided tour to get to know the Madeira's best of east. Leaving the Lido area where your tour begins, you'll first stop at Terreiro da Luta where you can have a look over the viewpoint.The drive continues towards the Pico do Arieiro mountain, at an altitude of 1818 metres it is the third-highest peak on the island and affords breathtaking views.After visiting the highest peak in Madeira, you'll head down to the coast through the forest to the last home of Madeira's emblematic straw-roofed houses. Passing villages and stunning seascapes, you arrive at the very eastern point for some views of the bold north and sunny southern coasts in one panoramic view.On the northern slopes of the island the tour reaches a popular starting point for 'levada' walks, Ribeiro Frio. With its trout pools, this area still has much of its original vegetation. The island was once completely covered by 'Laurissilva' forest, a relic from prehistoric times.Then you'll have time for lunch in Santana, that is characterised by its small thatched triangular houses, before heading towards Ponta de São Lourenço, situated in the eastern part of the island, this is the place where rocks, sea and nature combine.Your last stop is Machico, a viewpoint where you can look over the bay and the golden sandy beach before you head back to your accommodation. 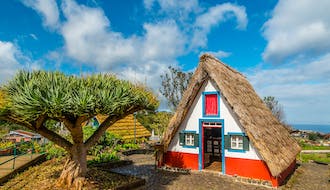