Banjul, Gambia, The
based on 3 reviews
Free cancellation

Meal Included
What to expect

Come on this tour and step into five centuries of history tracing the origins of Kunta Kinteh - The Gambian who was taken to the Americas. This is a historic tour during which you will learn more about the history of slavery through the many historical sites you'll visit along the way.You will depart by 07.00 am to Banjul, where you will catch the Banjul Barra ferry leading to the North bank. After approx. 1 hour in the ferry, you will reach Barra, where you will join your vehicle and drive through villages in a bumpy road, for approx. 1 hour, before reaching Juffureh Albreda in the north bank region of the mouth of River Gambia.There you will visit the freedom flag pole and a slave museum. Albreda used to be a French trading post during the slavery era. There is also a church, which was the first of its kind to be built in West Africa by the Portuguese. The essence of stopping there is to explain how the freedom flag pole came into being, which is nowadays one of the national monuments since 1970.Next you will proceed onto Juffureh, which is the home village of the famous slave who was forced into slavery in the mid seventeen century: Kunta Kinteh. It is on whom, Alex Haley has based the history of his best seller Roots, which retraces the events of the transatlantic slave trade.You will then reach the main hightlight of the roots trip- the visit of the Kinteh clan. On the way back to the boat a stop will be made to the museum, which retraces more than 400 years of slave trade that contributed considerably to the depopulation of the continent.Following the walk, you will board on a pirogue to proceed for a 2-mile sea cruise to Kuntah Kinteh Island (former James Island). This is an Island, which used to play a vital role during the slave trade. Located about 3km away from the village Albreda, this tiny Island, which used to be six times bigger than its actual size, was used to keep slaves for 2 weeks maximum, before they were shipped to Goree Island. The most iconic thing there is the dungeon remaining on the Island. That is just one out of 14, which were washed away by the erosion or the gunpowder explosions, that occurred in the mid eighteen century. Those dungeons were used to punish slaves who rebelled against the slave master. Hands and legs were chained and they were served one meal a day in order to be weakened.After all the extraordinary sights and information on this other historical landmark in The Gambia, you will cruise back to the village for lunch in a local Restaurant, before driving back to Barra to catch the ferry back to Banjul. 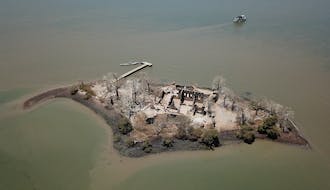