Naples is a city with a thousand facets. Its variegated features come out of the great civilizations that have dominated the city and contributed to the creation of its multicultural spirit. This itinerary offers the opportunity to discover the most fascinating places of Naples history starting from Castel dell'Ovo; the castle is often considered the place where the history of Naples began, in relation to the Greek legend of Parthenope, a mermaid who desperately abandoned herself into the sea until she reached the shore where the castle rises. Castel dell'Ovo is the oldest standing fortification of the city and it gets its name from an egg ("uovo" in Italian) that, according to the Roman myth, has been placed there to decides the destiny of Naples.From the seafront you will move to visit the New Castle, known under the name of Maschio Angioino, a Medieval construction overlooking the Gulf; then, you will go on admiring San Carlo Theater, the most ancient theater of Europe and you will finish your tour in Plebiscito’s square, where the Royal Palace is located and where you will get the chance to learn more about Naples' history, from the statues of its most important kings. 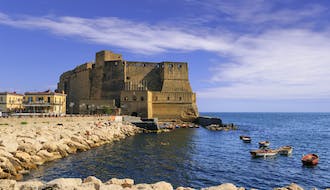