Explore the Cathedral-Mosque of Córdoba, one of the most visited monuments in Spain. Its construction began in the 8th century and it became the second-largest mosque in the world. On this two-hour guided tour, you’ll discover the interior that features a forest of columns along with double arches, the Maqsura, the Mihrab and the impressive chorus located close to the Mayor Chapel. In the 13th century, under Ferdinand III, the mosque was converted into a Catholic cathedral.In addition, you’ll tour the city’s historic Jewish Quarter. Located near the Cathedral-Mosque. It is one of the most visited areas in Córdoba. See the synagogue, the Jewish street, the Arabic market (Zoco) and the bronze statue of Maimonides all with your local guide. 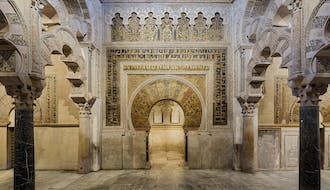 Total: USD
0
×
Cathedral-Mosque of Córdoba and Jewish Quarter walking tour
from:
$ 34
Sorry, it\'s sold out
Unfortunately all tickets have been sold out for this event