You'll start your full day tour from the hotel as you're picked up in your vehicle and drive to Angkor Archaeological Park where you'll head straight to the ancient capital of Angkor Thom, home to several incredible spots.You start at the impressive South Gate before heading to Bayon and its 216 giant smiling faces carved into stone. Next, you'll visit the 11th century Baphoun, the Elephant Terrace, the Terrace of Leper King, Phimenanakas, and the Royal Enclosure.After lunch, you'll go on to explore Ta Prohm temple, built in the late-12th century by King Jayavarman VII. Its mystery captures the imaginations of visitors, with parts seemingly swallowed by giant roots of the ancient trees that overshadow it. Your final stop is Angkor Wat. Standing as the world’s largest religious structure, the ancient Khmer Empire capital is home to a Hindu temple complex, baths, a library and other structures. 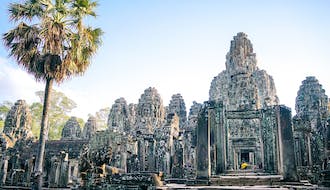