ArtScience Museum is an iconic cultural landmark in Singapore. Its mission is to explore where art, science, culture and technology come together. It is there at the intersection of art and science that innovation and new ideas are formed - “it's where the future is created”. The striking lotus-inspired building, designed by Moshe Safdie, features 21 gallery spaces spanning nearly 5000m2. Since opening in February 2011, there have been held large-scale exhibitions by some of the world's best known artists including Leonardo da Vinci, Salvador Dalí, Andy Warhol, Vincent Van Gogh and M.C. Escher. In addition, significant exhibitions have been presented that explore aspects of science including big data, particle physics, paleontology, marine biology, cosmology and space exploration. The museum has staged international exhibitions in partnership with renowned museums and galleries from around the world including the British Museum and Science Museum in London, the American Museum of Natural History in New York and many other institutions. The museum also originates and produces exhibitions in-house and run a full programme of education, events, performances, screenings and learning opportunities for a wide range of audiences.

Located 57 storeys up from the heart of the Marina Bay Area, the SkyPark Observation Deck boasts scenic views of the panoramic vistas of Marina Bay and Singapore's world-class cityscape. Take in a bird's-eye view of Gardens by the Bay and the impressive Supertree Grove or admire the sea view that stretches from Marina South Pier to the Singapore Strait. From above, you can try to spot Singapore's iconic landmarks. Look out for the capsules on the Singapore Flyer and the durian-shaped domes of the Esplanade – or the Merlion statue, another major tourist attraction in Singapore. Be sure to also keep an eye out for the orange-tiled roofs of the shophouses along the Singapore River. 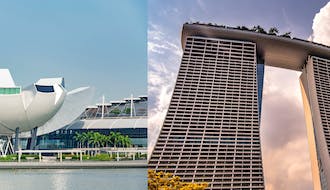