A mix of volcanic belfries and rainbow-coloured homes, La Laguna is so pretty that's it's a UNESCO World Heritage Site. Uncover all the standout selfie spots and wow-factor monuments of this colonial town with a local expert. You'll visit a mansion-turned-museum, the cathedral and an artisan shop. Arianne, one of our guides, says, ‘This is the perfect excursion if you love a bit of history and mystery. We've crafted this tour to introduce you to La Laguna's hidden corners.'

La Laguna dates from the Castilian conquest of Tenerife in the 15th century. It was their first capital, and its layout served as a blueprint for later Spanish colonial cities in Latin America. Built on a grid of eight elegant streets crisscrossed by eight alleys, it's crammed with pastel-coloured colonial-style buildings. Your guide will point out ornate carved wooden balconies, the burned-out shell of a convent and much more. See the Leal Theatre and learn all about the impact of the Napoleonic Wars at tree-studded Plaza de la Junta Suprema.

Plus, you'll get an up-close look at the antiquities in the Cayetano Gomez Felipe Museum. This restored 18th century palace has its own wood balcony overlooking the landmark Conception church. You'll also visit the cathedral, where you can admire a magnificent altar dedicated to the Virgin of Los Remedios. And there's a visit to a shop selling footwear – no two pairs are the same – and accessories made from Canary Islands banana fibres, which helps local farmers. 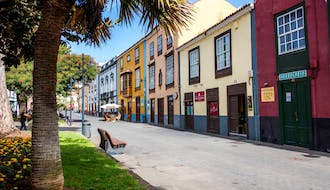