Learn about the great architectural landmarks of Michigan Avenue and State Street with this guided walking tour.

The 40 years between 1890 and 1930 saw the creation of some of Chicago's most memorable buildings, many of which are featured on this tour. After the World's Columbian Exposition of 1893, Chicago was determined to become a great cultural and commercial metropolis. This tour is a testament to that era's ambitions. You will have the chance to see buildings created by Daniel Burnham, Louis Sullivan, Holabird and Roche and other noted architects and hear the stories behind the city's architectural gems. 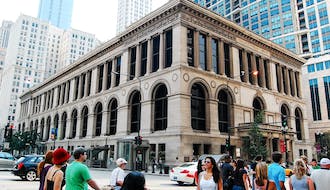