Two of Barcelona's star attractions feature on this full day tour into the city. And instead of your typical sightseeing day out, you'll delve behind the scenes of the iconic Camp Nou football stadium on an extended tour, then spend the afternoon at Barcelona Zoo surrounded by thousands of animals.

Once you arrive in the city, it's straight to FC Barcelona's home turf for a behind-the-scenes tour, ticking off sights like the pitch, the trophy room and the press box. And you'll even get to feel the pre-match nerves as you head through the changing rooms and the player's tunnel.

The rest of your time in Barcelona will be spent at the zoo, which is home to thousands of animals, including monkeys, hippos and giant anteaters. See the giant Galapagos tortoises plod around their enclosure, and catch sight of the bright-pink flamingos taking a dip in the lagoon. 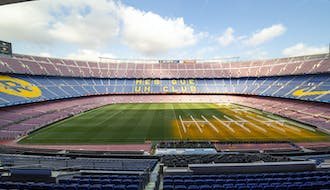