Tucked into Andalucia's south-east corner, Almeria has stayed something of a secret to tourists. It's a Spanish city whose story remains relatively untold. Dive into this historic port's past with a walking tour that'll take you from the age of Muslim Emirs and Arab caliphates to modern day fame through Hollywood and TV.

Get your bearings in the old quarter first. You'll find tree-lined boulevards and chic boutiques, all watched over by a huge Arab fortress that starred as the exotic capital of Dorne in HBO's smash-hit series, Game of Thrones.

Wander between Medieval buildings in the ancient Moorish medina – the hub of life in the 10th-century – and hear how the city suffered in the Spanish Civil War with a stop at Almeria's underground air-raid shelters. You'll check out the bulky, fortress-like cathedral, and less-known sights like Doña Pakyta Museum of Art and Nicolás Salmerón Park, too. Last up is the British-designed Cable Ingles pier, a symbol of Spain's industrial heritage. 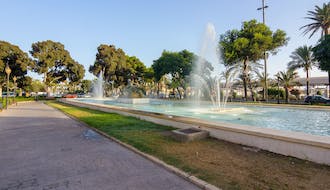